I am not my cancer by Denis Raymond 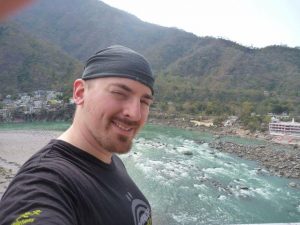 Sometimes, it can be hard to differentiate between YOU the cancer patient and YOU the person, especially when you have some kind of physical oddity, like a scar or a missing body part or, in my case, a medical device. Though many of us learn to live with it, the stares and awkward approaches by a bit-too-curious strangers continue to disturb at a fundamental level. You develop social scripts for these situations, for every level of engagement and every level of openness you feel like in that moment. For me and my very visible array of electrodes covering my scalp, I could switch from being a terminally-ill cancer patient to being “sick” and from being “on a clinical trial” to being “a lab rat”. Details would come and go, depending on how much information I felt like providing at that time, such as the size of the tumour, its location, the symptoms that led to us finding it, how I found the clinical trial… even my sleeping and showering habits would occasionally find its way into my story.

But then, after 2.5 years of living with my incurable cancer, I shed my electrode skin. I stopped using my medical device, which had repercussions I could never have predicted.

French sociologist Claude Dubar saw identity in two parts: a personal identity and an outer/social identity. The personal identity is the identity that we perceive ourselves to have, and the others identity is the identity that others give us. An outer layer covering an inner core. For Dubar, Shrek would have only been partially correct: we are more banana than onion. Though we can have a sense of the nature or the ripeness of a banana from the peel, it can’t give us a perfect picture of what lies beneath. The outer layer informs, but obscures, at the same time.
Thus, our “true selves” are hidden from view, beneath the layer of the outer identity. And sometimes, as it was in my case for a long time, it is all but forgotten. The cancer component of my outer layer was constantly brought up in my life, to the point where I myself came to accept that, yeah, this is who I am now. The new normal is a concept often talked about but is usually presented as a clean slate of your life, forcing you to abandon everything about yourself that came before that crucial cancer-diagnosis moment. It’s often easier to try and create something new rather than running around picking up pieces of your shattered life- whether or not easier is synonymous with better is up for debate, and may be a subject for an article at a different time.

And so we can find ourselves brushing those pieces aside and looking at ourselves in a new light. Unfortunately, this new light is often distorted by our recent trauma. The pervasive image of us as the cancer patient or survivor or fighter, or whatever term you prefer, can linger to the point of becoming a concrete aspect of our identities, especially that our outer social layer presents this aspect to the world during every.single.social.interaction. And we might come to accept this as the new normal. We become our cancer and accept it.

I certainly forgot about my true and inner self. The immense focus on my outer layer by myself and others brought me to live in existential turbulence as my cancer identity corrupted and ate away at my inner one. And once I lost my visible electrode skin, I found myself lost and floating in the realization that I had forgotten who I truly was. I had lived with my medical device for so long that I came to accept my role as the brain cancer guy. It was strange to suddenly not have strangers staring at me and being asked awkward questions by curious prodders.

For the first little while, I would awkwardly bring up my cancer in inappropriate situations, overly sharing information that others had not asked for. My cancer-social-scripts became so imprinted on me that it took me quite a long time to realize that I did not need them anymore. I could override them and not talk about the more disturbing details of my diagnosis to the barista at my local coffee shop as I waited for my morning latte. I could forego the details about my baseball-sized tumour I had in my right frontal lobe when I began any kind of social interaction with a new person. I was not bound to having to explain why I absolutely needed to sit next to an electrical outlet in any restaurant or meeting space, which was often necessary for my medical device. Once I realized that I no longer needed to talk about my cancer, and that I was free to write new social scripts, I found that I could start poking holes in my outer layer to rediscover what I had neglected for so long beneath.

For those who are coming in for the first time to the visible-cancer world, or even the non-visible-cancer world, do your best to accept as best you can the changes that come with this one-way ticket. Create the scripts you need to create for the outer layer, but please don’t neglect that important inner core of you. That person inside you can be recalled and reinforced by whatever lights a fire in you- it can be the arts, it can be journaling, it can be creating and sharing cute facebook videos… Any type of creation that gives your inner you a voice. And whatever you do, and whatever your situation, try and remember one important thing :
You are not your cancer.

I got a haircut the other day in Montreal near the Jewish General Hospital. I’ve now been living without my electrode-skin almost as long as I’ve been with. The hairdresser asked me “so what’s the story on that craniotomy scar?”

I’m now living off-script, and I couldn’t be happier. 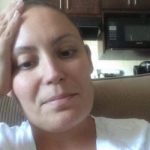 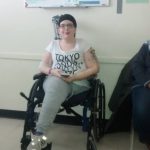